This past October, after the Ministers and Leaders conference at my Church in Tampa, I was already scheduled to preach in Kiev at a youth conference at “Zerkov Popeda” (Victory Church). Even the week before, I was praying and asking the Lord what to schedule next but there was no release in my spirit so I kept my schedule open, and thank God I did! I taught a session on Leadership on Friday, took part at a panel discussion on Saturday and preached Saturday morning. Young people from all over the Ukraine showed up for those meetings. 36 dedicated their life to Christ, followed by a call for the Baptism in the Holy Spirit and all 16 that came began to pray in tongues for the first time! The power of God fell in the place and many were touched and filled. 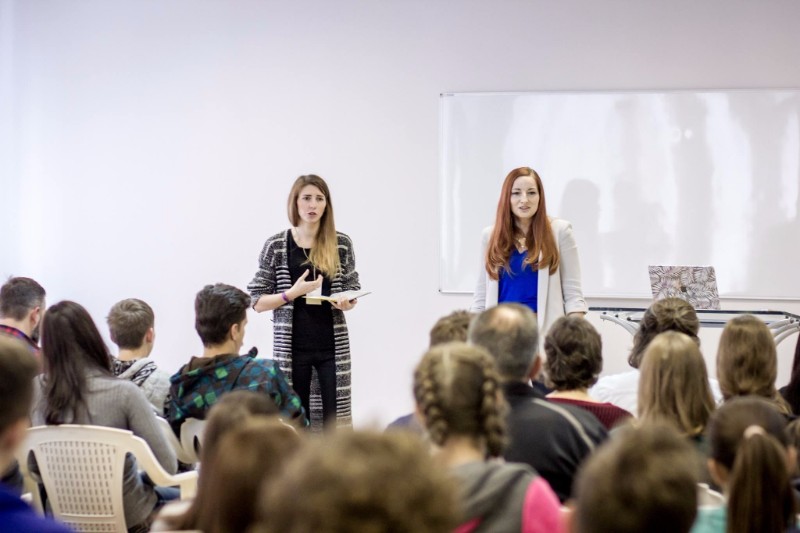 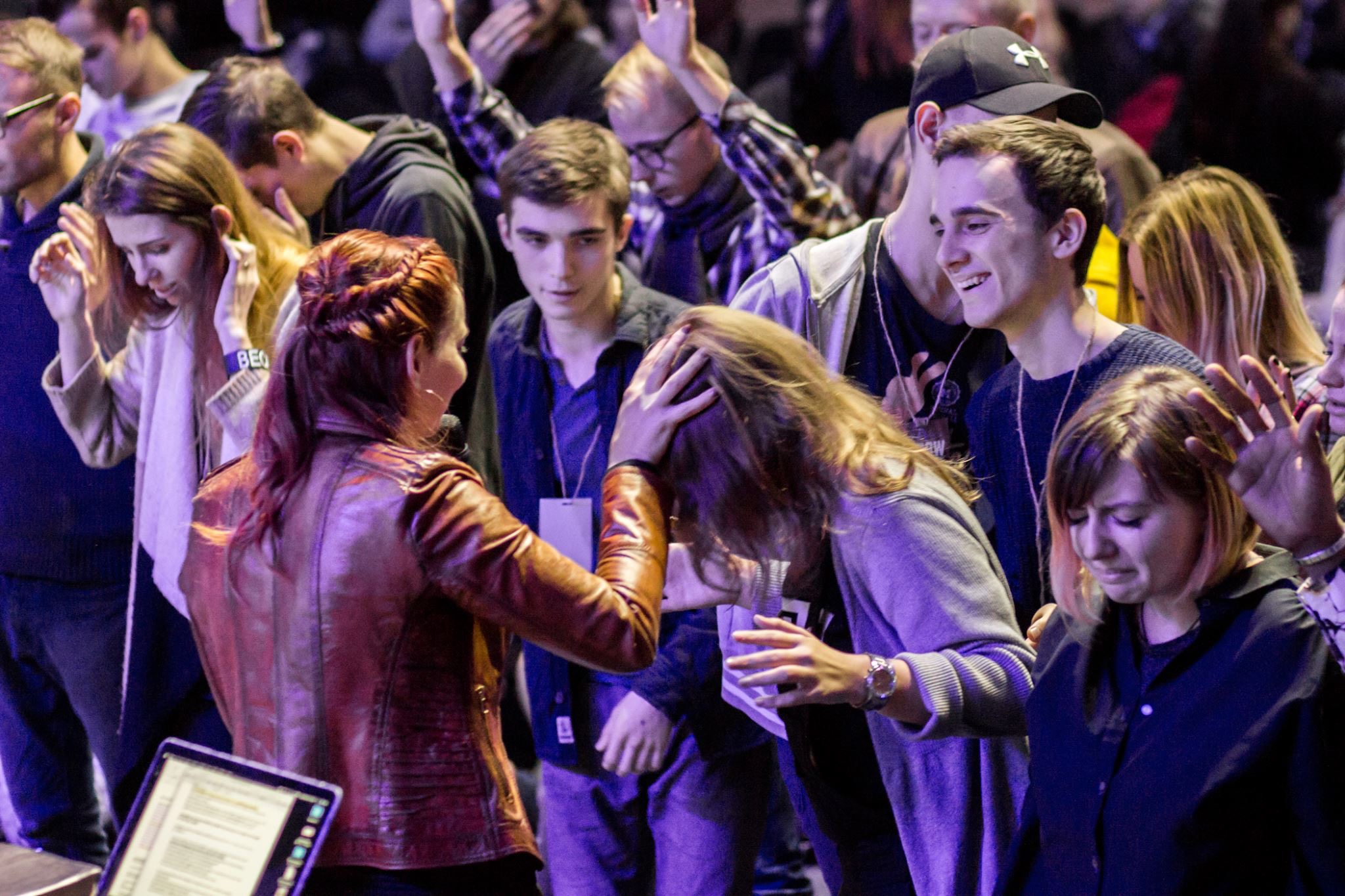 After my morning session, the senior pastor of an affiliated church that heard me preach asked me if I can come and preach at his church on Sunday. Of course I said YES, my schedule was open :D. So I packed my bags ready to leave on a night train to Nikolaev (412km/256mi) which arrived at 7 am. I got settled into a nice little apartment and got ready to preach at 11am. 12 people dedicated their lives to Jesus at that little but packed out church and many were touched by the power of God. Monday and Tuesday I taught on Evangelism for almost 6 hrs combined and many of the youth didn’t even wait for the weekend to win souls but led people to Jesus even before going home that night! 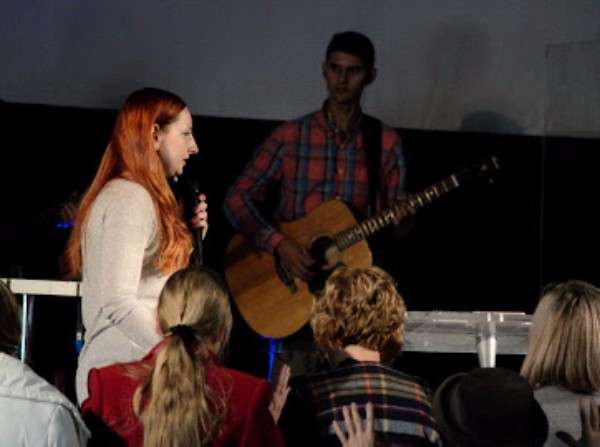 While I was in Nikolaev, the pastor called around and other pastors invited me to come as well. So Tuesday night I left to go to Odessa, a beautiful City 2.5 hrs south west on the coast of the Black sea. 16 dedicated their lives to Jesus at the altar on Wednesday night and the whole church came to the altar to receive a touch from God. We did two soulwinning sessions and went on the streets one day and over 64 people received Jesus on the streets! From Odessa I went back to Nikolaev where I preached and laid hands on everyone Friday night and did soulwinning training on Saturday. 66 people received Jesus on the streets that day. One of the soulwinners led over 30 people to Jesus at a feeding program that day! Early Sunday morning I went to the next city I was invited to, called Kherson, which is about an hour south east of Nikolaev. The church started out of a rehab, so a whole lot of former addicts that got radically saved and set free and are super hungry for God. On Sunday 40 people gave their lives to Jesus at the altar, 16 were baptized in the Holy Spirit and began to pray in tongues and the whole church came to be filled with the power of the Holy Spirit to win souls. Monday I taught on soulwinning and on Tuesday we had another soulwinning class and went out to evangelize. Many came to win souls the and another 61 people received Jesus on the streets! 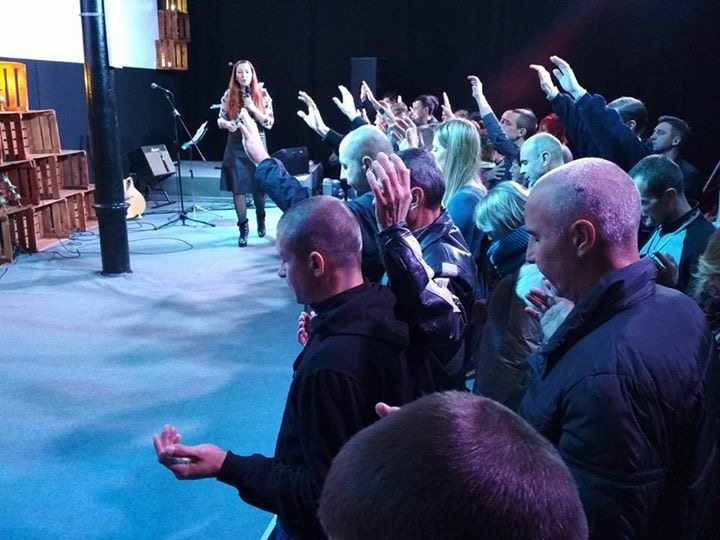 Now comes the intense part! A party of a few people, pastors and ministers came to pick me up at 2:30am to drive to the conflict zone called ATO and bring relief to a church, an orphanage and a military station. We had two fully loaded vans and there was just enough space for me. THIS WAS THE FIRST TIME I WAS ACTUALLY ASKED TO GO TO A WAR ZONE! It must have been the Holy Spirit, because who would ask a girl to risk her life in a foreign country? It was quiet hilarious how the pastor was so excited to have me come and asked if I can take the first train and then he reconsidered and told the coordinator that he understands if it would be too much for a young lady, he wasn’t really “thinking” before he realized what he was asking of me. It was funny look at them and tell them I’ve been to much worse places and sleepless nights are not a problem! ANYWAY, literally FIVE minutes after we left we got pulled over by the police. We were not up to anything illegal but there was some paper issues with the car and they held us for almost 2 hours!! In that time no one asked me for my papers, which was total favor on many levels I cannot all put in this newsletter. Long story short, we arrive late and this little church was waiting for us the whole time. I had no idea I was going to spend 12 hours in a van and then straight up preach! I looked like a zombie but the power of God fell in the place, 6 people gave their lives to Jesus and about 13 received healing in their bodies! That town, Marinka, reminded me a lot of Syria and Beirut. Torn up, bullet holes and broken windows everywhere. Here comes the cool stuff. They put a 15kg (33lbs) bullet proof vest on me and from the church we headed to a military station in an abandoned hospital. No kidding, I thought I stepped into call of duty. We got a tour of the station. Then we blessed the guys with food and sweets and before we left, one of the guys in our group shared a bit. No one responded… one actually flippantly said “I don’t want any of that”, so I asked (yeah politely) if I can say something. The moment I opened my mouth my heart broke for these guys. I’m not trying to be funny but they were all handsome young men and just at the beginning of their lives and out there shedding their blood for their country, willing to die for their land without even knowing the creator of that land. I basically said, I don’t care what you think about church or God, but there is a heaven and a hell and I don’t need to be here, risking my life for people I don’t even know, but God knows you and sent his son to die for you if you believe it or not. I have been much worse places than here and I tell you the truth that I have not an ounce of fear in me because I know where I will go when I die. So I am going to pray for you and you will pray with me to receive Jesus, understood? They all said “yes, understood” and we prayed and as far as I could tell out there in the dark at least 10 out of like 16 prayed to receive Jesus and thanked us for praying for them. At the same time another soldier lost his life on another post we were going to go to next but couldn’t because of open fire. This is happening in EUROPE. Yet again I received another surge of urgency in my spirit. After having dinner at an orphanage we headed out and drove back to Nikolaev. The drivers were tired so we arrived at around 8pm the next morning. 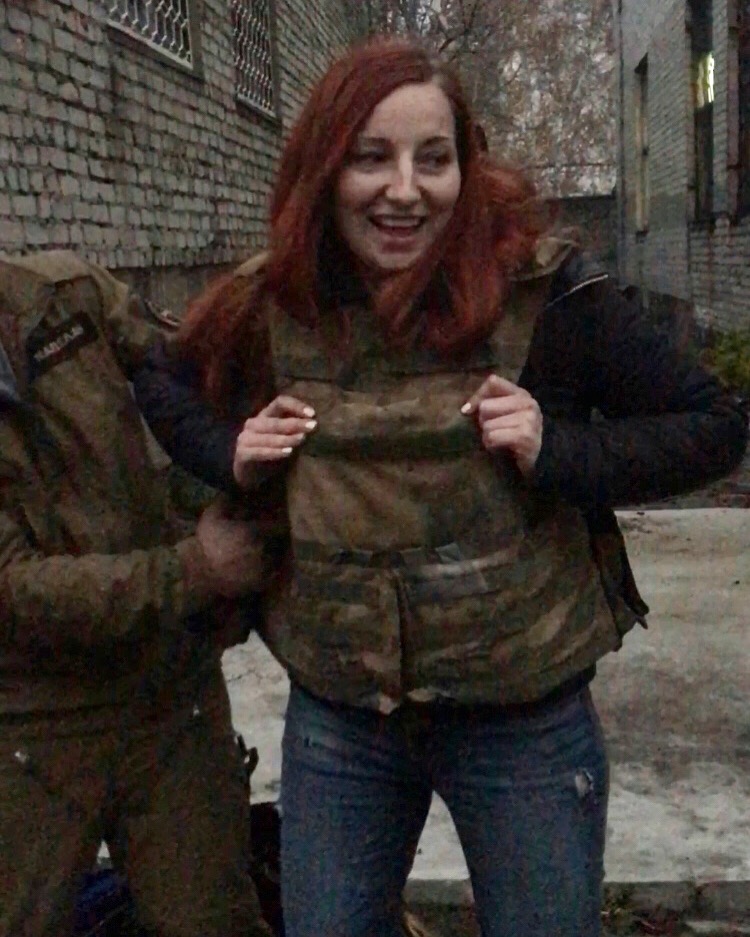 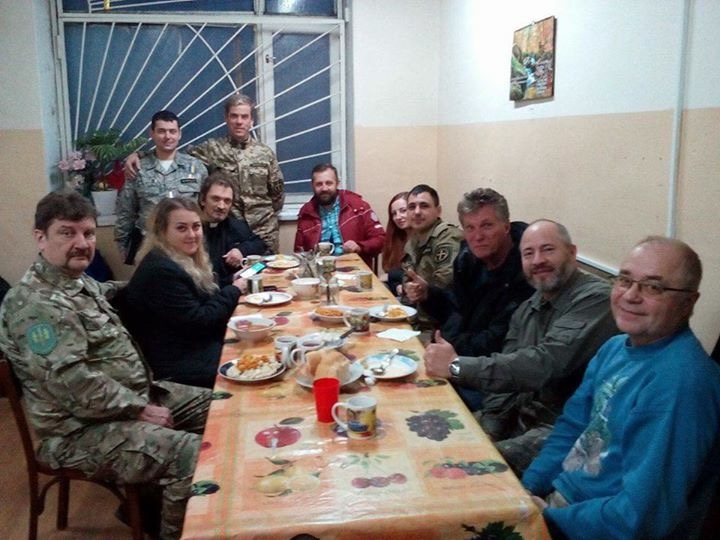 I slept for a few hours at the pastors house and in the early evening went on another train for 14 hrs to go to my last destination, a church in Kharkiv, in the east of Ukraine. Just FYI most cities do not have airports and the trains have beds so it’s not the worst form of transportation. There I taught on soulwinning Friday and Saturday and took out about 18 people on the streets and 27 people received Jesus! On Sunday morning 14 people gave their lives to Christ at the altar and many came to receive the power of the Holy Spirit to win souls. 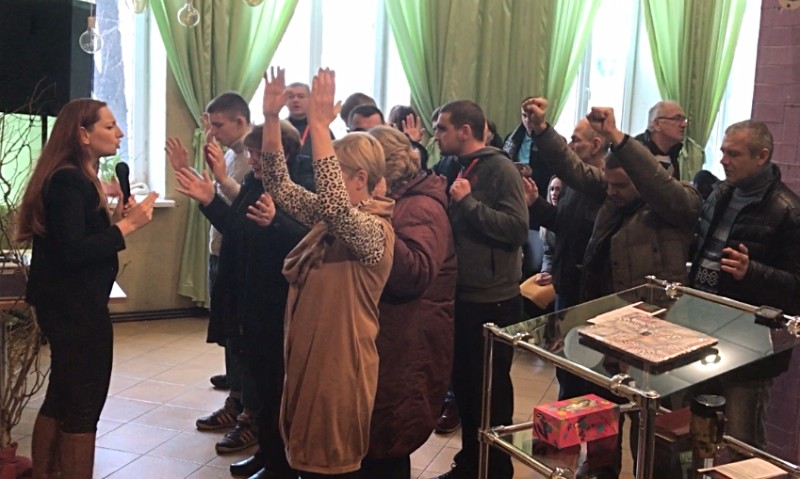 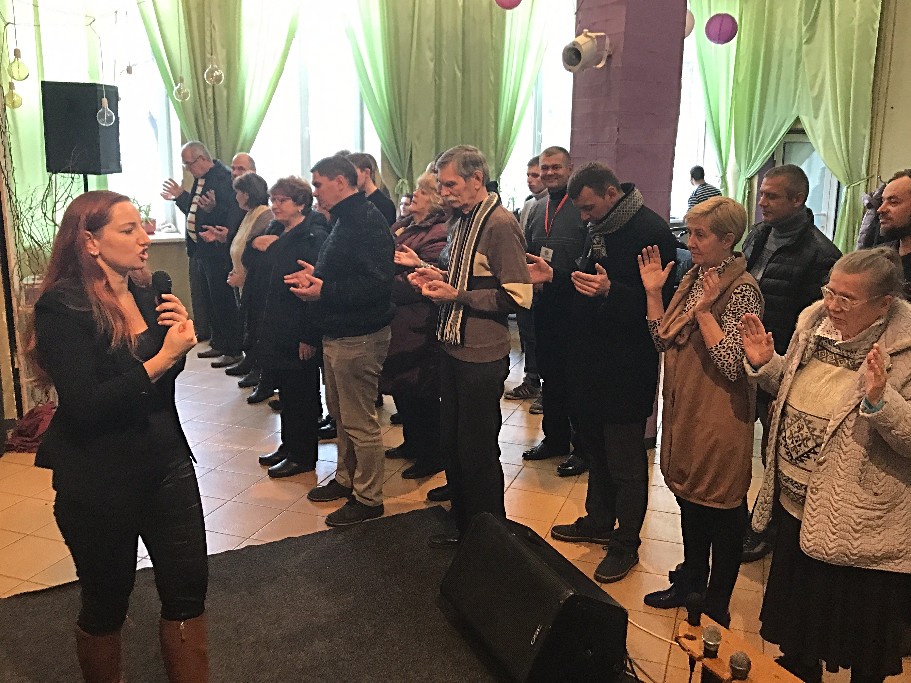 Over 280 people received Jesus! 33 were baptized in the Holy Ghost, 16 were healed in their bodies and over 100 believers were trained on the streets to win souls and many more committed to be a bold witness for the Lord Jesus Christ! And all the glory goes to our wonderful God! One city turned to 6, all over the country, with over 35hrs on the road in 17 days!! It was intense and awesome!

Where am I heading now? Nov 16 - 27 Bacolod and Manila, Philippines

My first time in ASIA! ISIS has been affecting the Philippines big time, we just don’t hear much about it. But the church must rise up in the power of the Holy Spirit so I am excited to be able to minister there.