Winning souls in Thessaloniki and Helsinki

I trust this post finds you well and full of the joy of the Lord! If you’re not full of His joy, just ask and receive right now! :D As I said on Facebook this email is packed with testimonies and things I experienced that I will talk about for many years.

If you read my last newsletter you will know that I preached at a youth camp in Turkey where a group of young people from Thessaloniki Greece joined us and were mightily touched by the fire of God. That encounter stirred them up to reach out to the lost more than before, so I was invited to come and train that church how to win souls in Greece. The day I landed I was taken to the church by bus and prayed for a guy sitting in front of me and he received Jesus on the bus and missed his stop because he wanted to finish the prayer.

The few young people with me were astonished that I would do such a thing on a public bus and were amazed he prayed out loud. I also got my hair cut and led the hairdresser and 8 of her students to Jesus. No one can encourage people to win souls when they don’t do it themselves.

If you follow the news you might know that the economy in Greece crashed and this past July the banks were shut down for 10 days and now cash withdrawals are restricted. As my friend told me the Greeks are very prideful people but in the last few years that pride was crushed. The young generation has lost it’s hopes and dreams as the unemployment rate for youth is 50%.

Many people cannot imagine what that is like. This is the time for revival in Greece! People are desperate and in need of a living God.

This email would get super long if I told you about my trip to Philippi, the place where Acts 16 happened and where I led a precious woman to Jesus, a stone throw away from the prison of Paul and Silas. I talked about it on Periscope.

To sum that story up, this Lady worked at the Museum in ancient Philippi, where the first church in Europe was built. When I asked her if she had Jesus in her heart she said NO. I took her hand and prayed with her and she invited Jesus to come into her heart. Leaving the museum, I was thinking about it. MILLIONS OF CHRISTIANS from all over the world, from all denominations visit that place where this woman works daily and NO ONE has told her how to be BORN AGAIN. HOW IS THAT POSSIBLE?!?!?!

I got so mad. But then the Holy Spirit brought Hebrews 12:1 to my mind and said: “Paul and Silas saw what you did”. It may sound weird but it hit me. I heard my pastors say many times that the book of Acts is not over, that we are continuing it, but the reality of that never hit me so hard as in that moment.

REVIVAL always causes people to go after the lost. My desire to see revival went to another level in that moment.

Revival is exactly what heppned in the youth group from Greece and they are taking it to the streets and refugee camps. During my visit in October we have seen 30 people receiving Jesus in one weekend. After I left, the youth went to a refugee camp near Thessaloniki and the youth leader Melina was so excited to report the news to me! Over 30 Muslims received Jesus and were given New Testaments in Arabic. She even sent me a video where one of the men was so happy that she prayed for him and thanked her (the video is not online unfortunately). They will never be the same again!

I am so thankful to see the fruit even after I leave a place. The statement on top of this email really impacted me. THAT IS WHAT JESUS FELT LIKE! His whole life He was seeking and saving the lost. Only Jesus can impact someone’s life like that and make them more like Him.

After my few days in Greece I headed to Helsinki Finland to minister at their midweek service, hold a production training, do two soulwinning sessions and preach at 3 Sunday services.

That weekend about 320 people received Jesus on the streets! If you remember, I had the opportunity to do a 2 week school of evangelism in Helsinki this past July with a result of over 3000 people receiving Jesus on the streets, but what I found out last week was that there is 6 new students enrolled in the River Bible Institute Finland as a result of the summer school! That is lasting fruit!!! Praise God for touching these lives!

On the third Sunday service at the River Helsinki 8 Muslim men showed up who live at a refugee shelter.

Let me tell you what happened.

When they saw that people were falling down one of them wanted me to do it to him. I explained that I have no powers, God is just using me to touch people. So I told him to lift his hands and look on God and not me. He did. Then he looked at me and said “I saw the color red, what does it mean?”

I told him by the Spirit that it is the blood of Jesus. I prayed for the other men as well and a few of them had similar visions and asked me for the meaning. It was all related to Jesus and heaven. They were SO HAPPY that I prayed for them and thanked me and left full of joy, saying that they feel peace in this church and they want to come back.

To FEEL PEACE for a refugee is not the same as it is for us because most of us do not know war.

Just thinking about this past trip has me in tears, there is too much to write.

If you want to read one of these man’s astonishing stories you can find it on my facebook page > here.

How amazing is God!!! To see the impact God can make just through someones obedience to Him is mind blowing.

GOD CAN USE YOU TO CHANGE THOUSANDS OF LIVES!!!! Even hundreds of thousands and millions if you are willing to lay everything down.

Back at the River Amsterdam Church things are moving forward. The Bible school is enrolling new students next month and we will hit the streets with the Gospel, so more testimonies are to come! 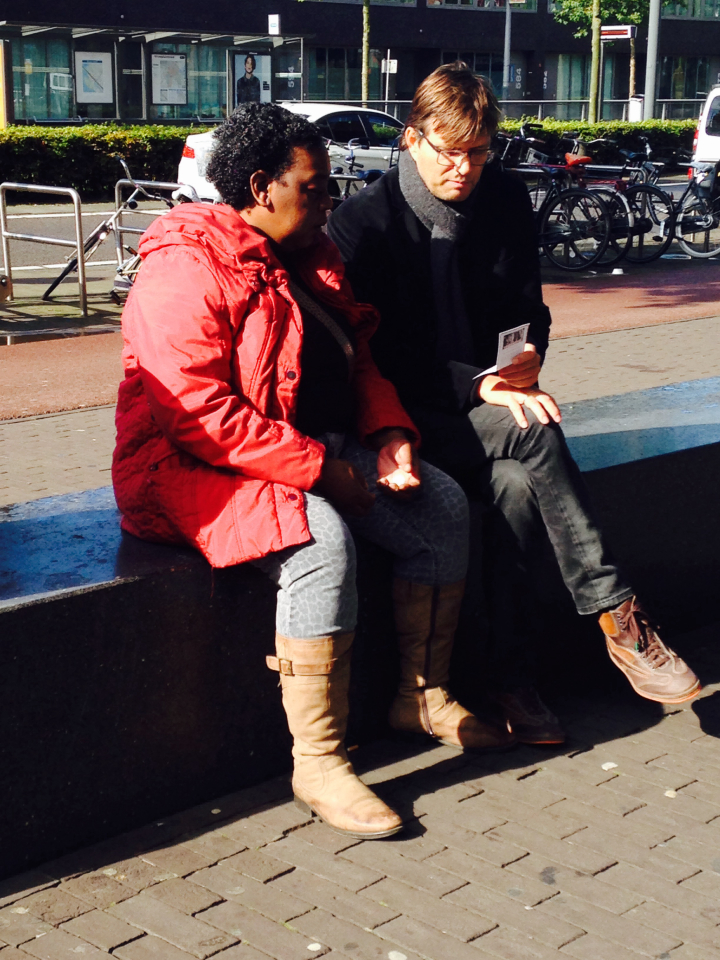 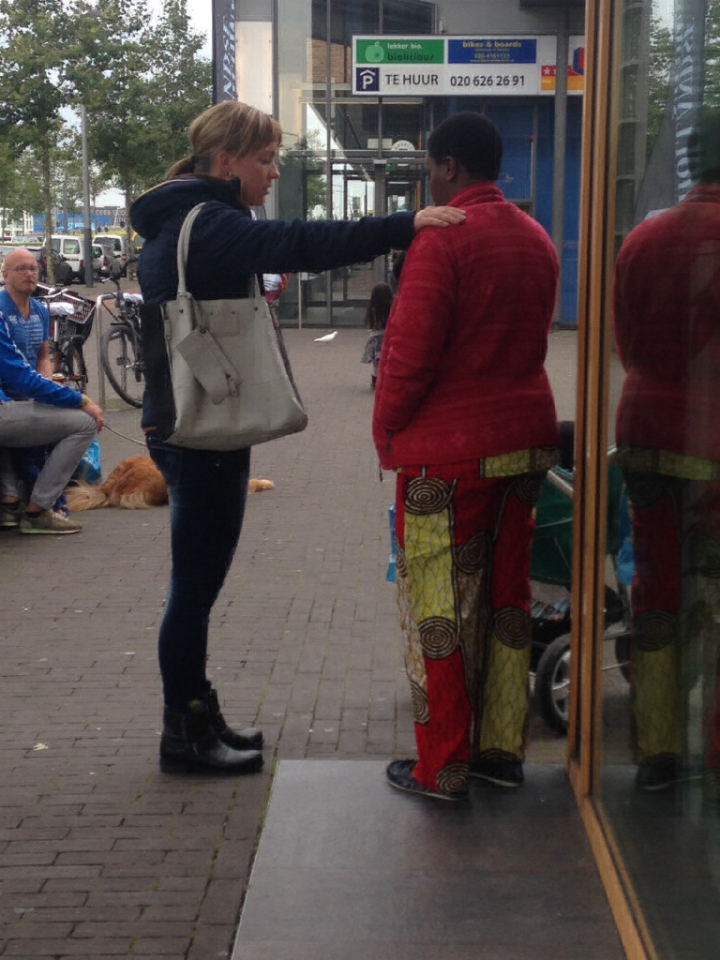 At the River Helsinki, the power of God fell! 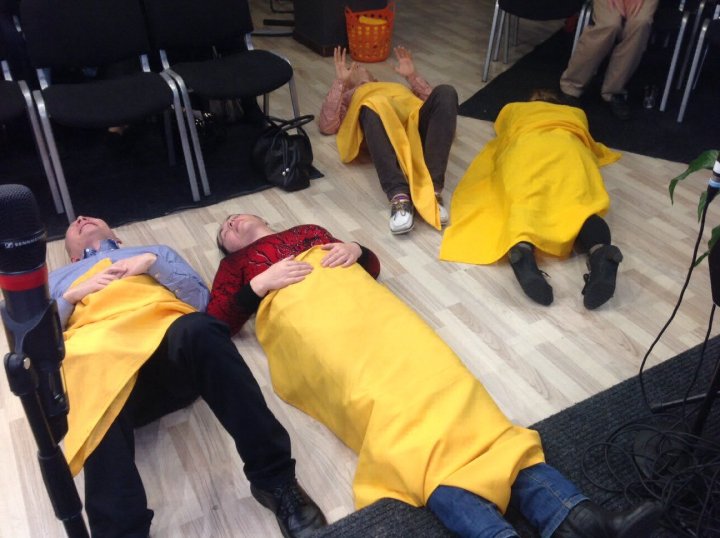 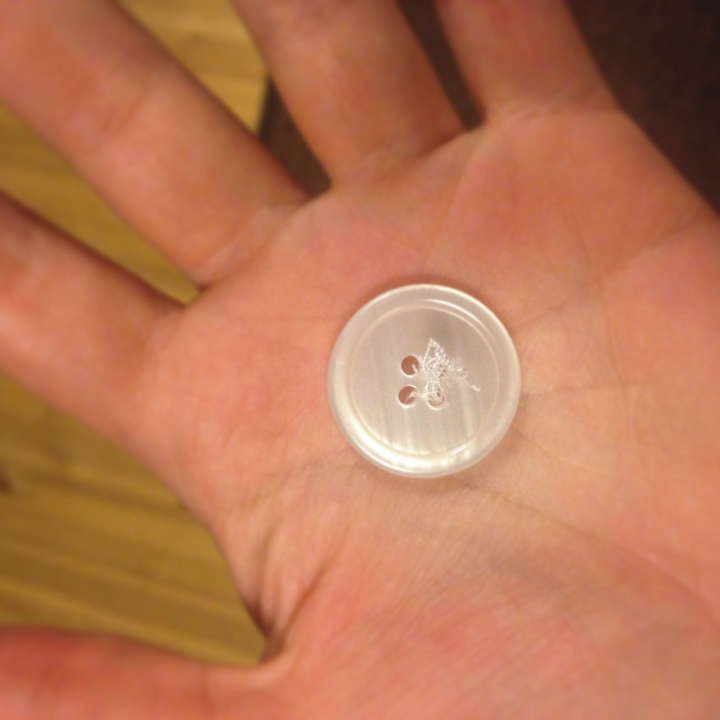 Let me tell you about the most precious button.

When I preached at the River Helsinki church last Sunday, the church took up an offering for me and the worship leader Jussi encouraged people to give even if they only have a button to give. So a 9 year old girl took that button off her clothing and sowed it into my life. This girl also ran up in every prayer line and was crying under the power of God.

Never have I been so touched and happy about a button. 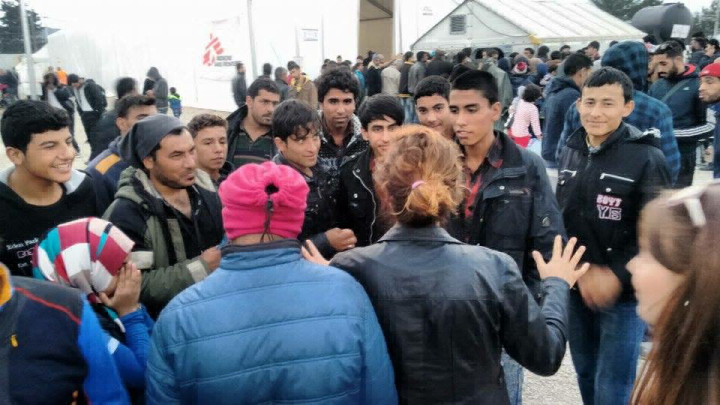 The Greek youth at the refugee camp where over 30 Muslims received Jesus!

SO WHAT IS JANA DOING NOW?

I am back in Amsterdam as the administrator of the River Bible Institute Nederland where I also teach and head up the Evangelsim until January (for now).